We’re a month (five weeks) into the market season, and today was only my third day there.

Two weeks ago it was so very rainy, and in a market first, I called to cancel the day of. The forecast was for 90% chance of rain, and it was really coming down on my drive in. I was filled with equal measures and and guilt as the thought of cancelling.

I did feel some guilt for cancelling, but the rest of the day felt like a snow day. You know, I had plans for something else, and then my day opened wide up. Morgan made a fire, and I crocheted and added items to my etsy store. (Which led to sales, so it’s not like I had to swallow the cancellation fee.)

Last Saturday the forecast was for rain again, and I studied the hour-by-hour forecast as if my life depended on it. I decided to go, even though my normal neighbors wouldn’t be there. I was cold and miserable for much of the day, but sales-wise, it was the best Memorial Day weekend in three years. 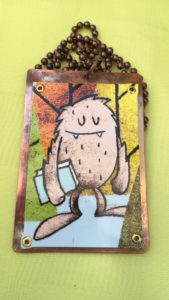 Even so, sales were slow in the morning, and I dislike the negative self talk that starts up when people pass my jewelry by. I know it’s not for everyone. I know people  not judging me. And, I know that my self worth is something more than the $35 booth fee. Never mind that there’s a huge sense of relief upon making that amount for the day.

It’s one thing to know these truths. It’s quite another to internalize them. 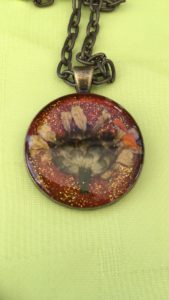 The funny thing is that despite today’s sunny weather, sales were kind of slow. It really is a crap shoot.

All of that said, this morning an adequate song was on the radio when I pulled into the lot. It was the best I could find. Last week it was the Beatles’ “Let it Be.” There was a message there for me. And, it’s no secret that the song playing in the radio when I pull in will determine the day I have. It has to be the radio; it can’t be something I choose. Yup, see the previous post about he having weird ideas.